September 22 – Big travel day. We were driving from Stykkishólmur to Mývatn so we knew we had to get moving. We got up and it was still a bit rainy, but not terrible. We packed up and drove off, heading toward the parking lot near the docks.

We wanted to see where they filmed the Walter Mitty scene that helped send us on this adventure, so we grabbed a coffee and walked around for a short while.

After a bit we took off, heading back the way we came to catch the road out to the Ring Road. Just outside of town we found the road, but to our surprise (like, we were in shock) the road was a rough, dirt road. Although the speed limit was 90kmh, there was no way. I know the old saying “Drive it like a rental!” but, um, no. 🙂

Many, many stops along the way. It was incredibly beautiful around every corner!

We drove until we reached Route 1, then followed that for hours. Like I said, there’s so much to see we stopped every few minutes it seemed. 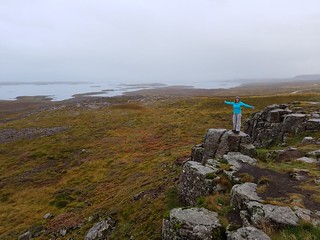 I don’t think we arrived to the next camp until after 6pm. The camp itself was in someone’s farmland, but the facilities and sites were great! The bathroom was warm and clean, and we parked in a private little area. After getting cleaned up we collected some sticks and fired up our wood camp stove. Boiled some water for rice, and had a delicious chicken tikka with rice dinner. Followed by some spiced rum, we were ready for bed early. It was cool out, but warm in our sleeping bags! Only one other couple was at the camp, too.