September 24 – We woke up and were on the road early. The overnight rain made for a very peaceful sleep, but we were both thinking the car camping was getting a bit… old. I’m 6′-3″ and even with the front seats pushed forward it was very roomy. Our Suburu Forester was nice, and setting up the “bed” wasn’t bad at first, but we’re still sleeping IN A CAR.

We headed back the way we came… up the hill and back down. While the rain was pretty much gone, the fog and mist was heavy. At the top of the hill/mountain visibility was pretty limited, and driving on the switchbacks with nary a guardrail had Dexter clinging to the seat!!! We were back on a pot-holed, dirt road again, which turned out to be Route 1… the main road. The views would have been amazing but we were socked in pretty good. Eventually we started getting clearer skies, and were amazed we were now in “glacier country”!!! 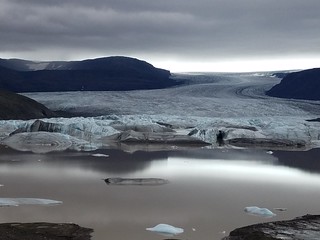 Hard to believe, but Iceland just kept getting more and more amazing. We actually started kidding that our two most used words were “WOW” and “CRAZY”. Every turn revealed more amazing views that blew us away.

Our road trip took us to Hofn where we stopped for gas and a bathroom break. I was wanting (badly) to stay in a room but we also wanted to keep to our budget. It definitely was raining, albeit gently, and we had yet to break out the tent I rented last week. The car was roomy enough and better yet, dry and VERY easy to set up and break down!

The guesthouse next to the N1 seemed okay, but after going in and then finding out the cost for the night, we bailed quickly. Deciding to eat a late lunch we went to Kaffi Hornid for pretty good lunch. I’ve read over and over dining out in Iceland is expensive, but if 1> you’re budget is prepared and 2> you don’t go overboard it’s not bad to grab food out. The service was good, too.

We headed out in search of a place to stay, and by now I really, really, really wanted to have a nice bed, shower, and… well, I wanted a real bathroom. Warm, well lit, a solid door; the works. 🙂 Sooo we drove out of Hofn and continued west, finally passing a hotel, the Fosshotel Vatnajokull. We stopped in and again, the price for a night was wayyyy too high for us (about $360 USD). We pressed on and found another, Smyrlabjorg. Going in the receptionist was extremely friendly and helpful. He said he could give us the non-tourist season rate which would save us about $40, and while Dexter went to the ladies room, I signed. By now I could feeeeel the bed under me and money was no object! Dexter came out and when I told her how much (about $180 for the night), she gasped. “But there’s free breakfast!” I told her. By the time we got to our room and showered, it was evident IT’S SO WORTH IT!

We decided to head out in search of a good meal for dinner (hey, we’re showered and smell good, we have a bathroom, might as well take advantage of it!), and ended up back in Hofn. We went through town and found Z Bistro, a fantastic place for dinner and drinks. Seriously, the food was good, the wine delicious, the atmosphere great, and the dessert was wonderful. We ate well and the bill was around $65 for the two of us, which made this day our most expensive. Hey, we car camped for the past few days, so we’re letting loose! HA!

We left Z Bistro and headed toward our hotel in the dark. Yeah, the landscape changes when you can’t see anything, so we overshot our destination by 15 minutes, turned around, turned around again, and eventually pulled in. The room, bed, bathroom, everything was great. No TV, but no worries. I washed some socks in the sink, climbed into bed, and drifted off to sleep with my future wife. 🙂