September 26 – We woke up early, cleaned off the moisture from the windows and clamored outside. It was cool and misty but not really raining this morning, which was quite welcome. The sound of the ocean was clear and drawing us toward the beach. We put our shoes on and started walking down the dirt road, and cresting the small hill we finally saw what had lulled us to sleep the night before.

We stopped, looked left and right, and just let our jaws drop. WOW. For miles, the black sand beach stretched into the fog as white foam lapped against it. It was absolutely stunning, and there was not a soul around except the two of us. We walked to the water, then up and down the beach for a bit. I had never seen anything like it! We were mesmerized by it, really, and could have stayed a lot longer if the weather was warmer! 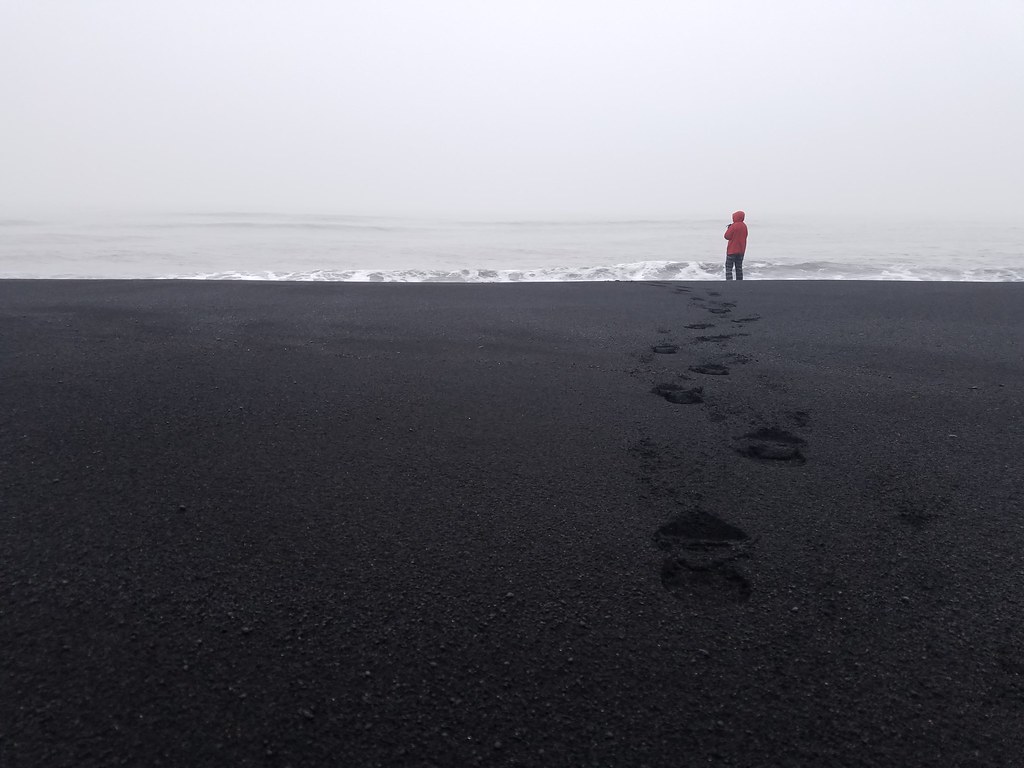 We went back to the car and readied for the day. Soon we were on the road, stopping to find where the other black sand beach was (on the western side of Vik). We got to that beach and parked, finding this beach was already “busy”. Less than a dozen people were there, but after having the eastern beach to ourselves, “busy” was relative. We strolled around, picking up some rocks and then climbing into the hill at the end of the beach. It was exhilarating to say the least! We chatted with a gentleman who asked about the puffins (neither of us had seen one yet), and then went back to the car. Our destination today was Þingvellir with a few stops along the way, so off we went, still surrounded by the morning mist.

Our first stop was Skogafoss, only a short distance to Vik. After traveling around the country and experiencing the scenery, we finally were among a throng of visitors. The waterfall parking lot was quite full, and the tourists were everywhere. I know, I know… WE were tourists, too! By now we were spoiled, though. 🙂 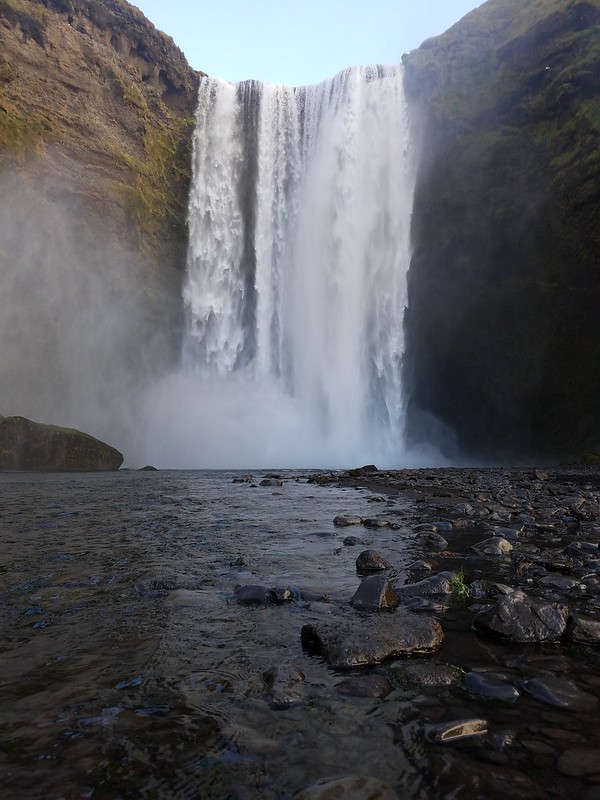 We stayed quite awhile here, and eventually made our way over to the Skogar Museum. We went inside but, although it looked very interesting, our budget said “move along”. So we did.

There were a few stops along the way, but we eventually made it to Geysir. Yup, we recognized the smell of thermal springs!Again, the parking lot was incredibly busy, and there were people everywhere walking around taking photos, checking out the scenery, shopping, and eating. Tour buses were coming in and out, cars circling for parking spots… quite the flurry of activity here! We parked and made our way to the geysers, and watched the Great Geyser erupt a few times. We went into the shop but left empty handed (again, our budget!), got into the car and proceeded to Þingvellir, and I totally forgot about Gullfoss nearby!!! UGH.

Arriving early in Þingvellir, we contemplated going right through and heading to Reykjavík. Þingvellir is rich in history and geographically interesting, but not as much as we thought it would be. We went into the tourist center and inquired about the camping, and decided to stay the night here. I tried to wash some clothes but couldn’t figure out the washer/dryer combo, so we climbed into the car to get ready for the night. We ate, had a drink, and then climbed into our sleeping bags. As we lay there I noticed a strange cloud forming overhead in the waning light, and when I mentioned it to Dexter, she exclaimed “That’s not a cloud!” We had picked a great place to spend the night!

We jumped out and, even though it was COLD, were treated to our first glimpse of the Northern Lights!!! Speechless… it was probably one of the most incredible things I’ve seen Mother Nature present, and the dancing lights did not disappoint. Both of us stood, stared, and photographed (or tried!) the Auroras as long as we could. To say it was cold tonight was an understatement… WE WERE FREEEEEEZING!!! We jumped back into the car and started it up, thankful we weren’t in a tent. And no, we never did open that tent! LOL

Sliding toward sleep, I kept looking up through the windows until around midnight I couldn’t stay still. I hopped out with the camera and took a few more photos, then jumped back in, chilled. It was the coldest it had been the whole trip, and that sleeping bag felt great!